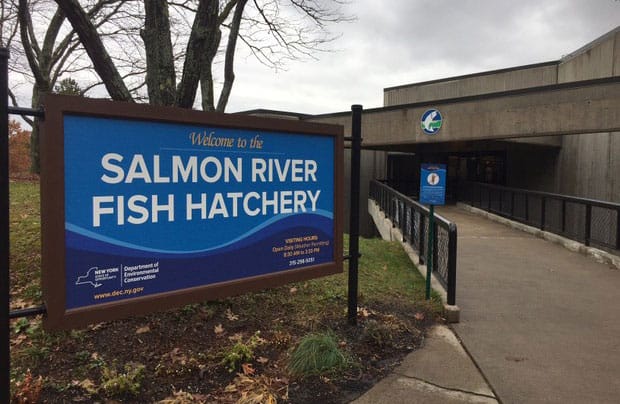 It’s also, according to the state Department of Environmental Conservation, a huge economic engine for the greater Oswego County area — as well as for Lake Ontario in general. Those two points and others were emphasized this morning at a press conference held at the hatchery, which was attended by DEC, state and local officials. 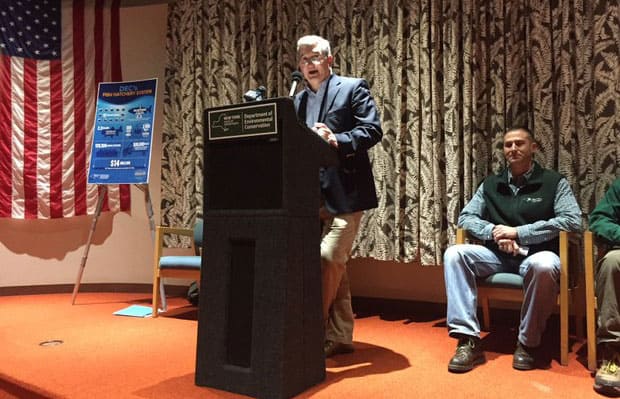 Ken Lynch,  the DEC’s executive deputy commissioner commissioner, announced the completion of $150,000 in improvements to the hatchery’s visitor’s center during the past year. Those improvements include new live fish displays, revitalized public areas, signage and interpretive displays.

Lynch noted a second phase of coming improvements will include: 1). “A comprehensive engineering study to maximize energy efficiency and reduce water use and enhance fish production; 2). Infrastructure upgrades including new windows and doors, a new heating system, backup power, cellular phone service and a new fish ladder; 3). Reimaging of all interpretative and visitor areas for a seamless and enchanced visitor experience.” 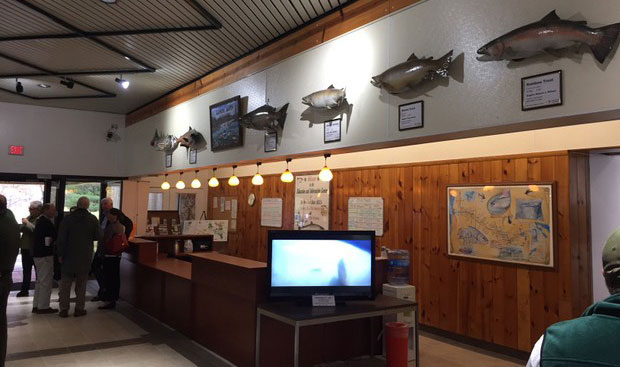 Assemblyman Will Barclay, R-Pulaski, said the hatchery has made Oswego County “a world class fishing destination. Anglers from all over the world come to fish on the Salmon River and on Lake Ontario.” It’s success is due in large part, he added, “to a great partnership of state and local government, businesses and and sportsmen.”

According to the DEC, the hatchery’s economic impact includes some $27 million annually on Salmon River angler expenditures alone — and $85.9 million as a result of anglers fishing the open waters of Lake Ontario and other N,Y, tributaries on the lake.

Dave Turner, from the Oswego County Department of Community Development Tourism, noted that the Salmon River is tremendous attraction to anglers across the state and beyond. He noted more out-of-state fishing licenses are sold to anglers who fish the river than all the counties in New York that border Lake Ontario combined. In addition, licenses last year were sold to anglers from “every state in America and 30 countries across the world.” 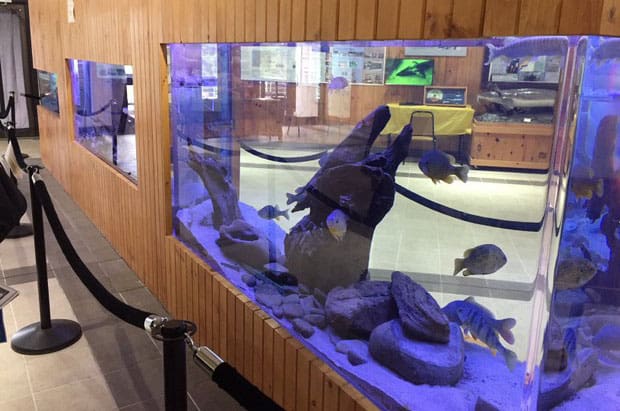 A new aquarium, featuring three sections, is one of the highlights of the hatchery’s improvements in the visitor’s center, which attracts about 50,000 visitors annually. 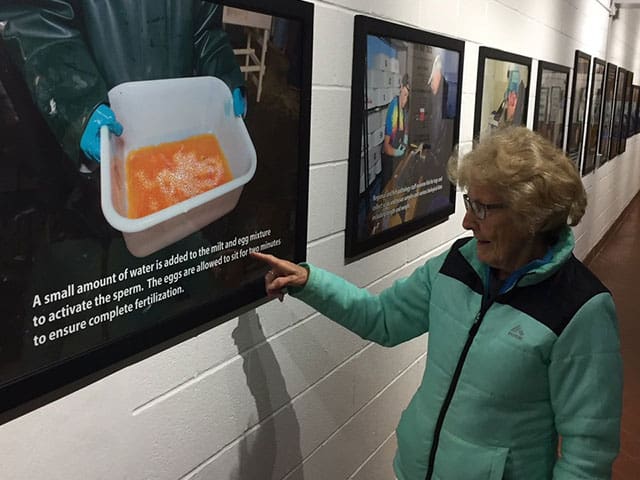 Oswego County Legislator Margaret Kastler checks out a new photo gallery at the visitor’s center that describes the step-by-step process in which salmon and steelhead eggs are collected at the hatchery, fertilized — and they raised into fingerlings and yearlings for later stocking. 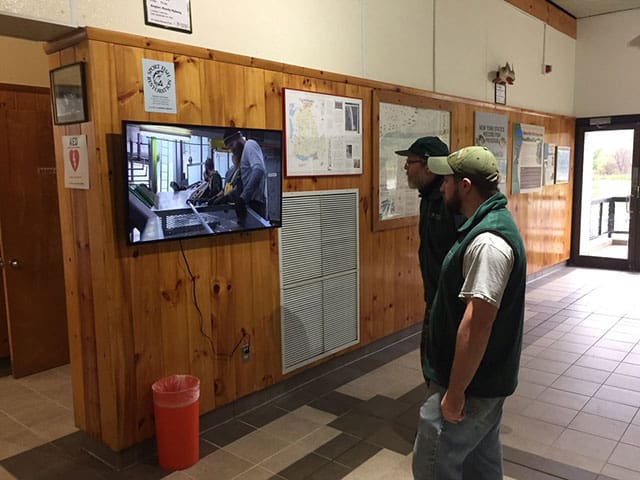 A new video display shows the egg collection and fishing rearing process that takes place at the hatchery. 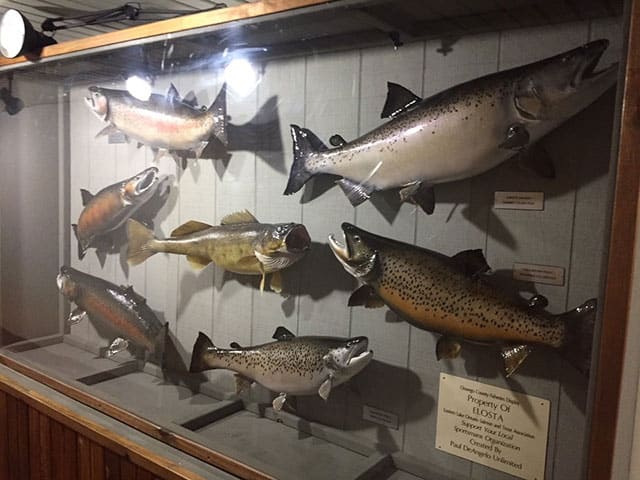 According to the DEC, the trout and salmon raised at the hatchery are economic drivers behind the fisheries of Lake Ontario and its American tributaries — resulting in $125 in angler expenditures for every dollar spent at the hatchery by the state. 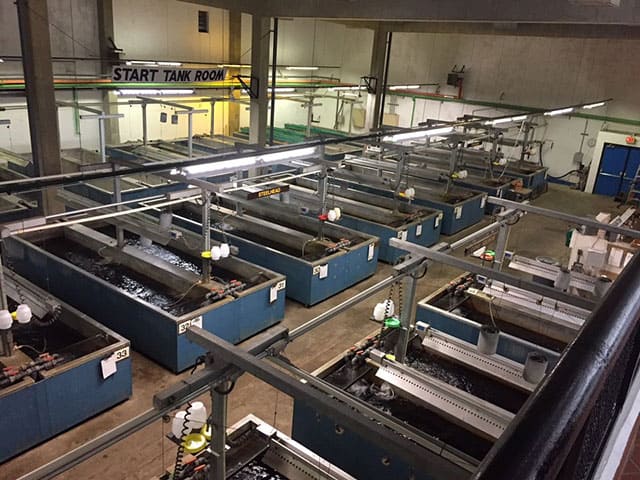 A number of indoor water tanks are pictured above in which salmon, steelhead and other fish are raised throughout the year at the hatchery. 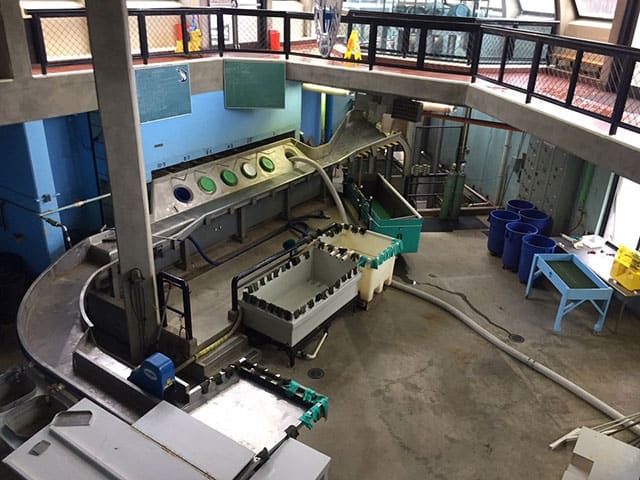 Hatchery visitors can stand on the balcony above to witness the Chinook and cohol egg collection process by hatchery staff each fall. The staff recently completed this year’s egg collection and met all of its goals. 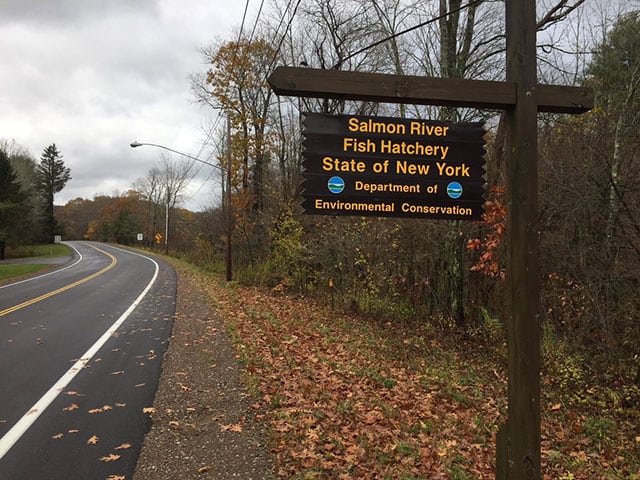 Constructed in 1980, the DEC’s Salmon River Hatchery each year produces more than 2 million fingerlings (young fish 3 to 5 inches long) and 1 million yearlings (fish one year old or over) for stockings in Lake Ontario. The recent improvements, said DEC officials, will result in an “enhanced visitor experience.”

Courtesy of newyorkupstate.com – Article and photos by David Figura