Courtesy of Telegram.com on November 25, 2015 by Bradford L. Miner Correspondent 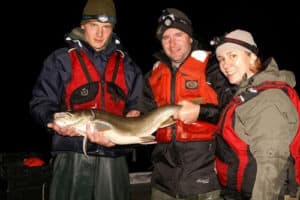 From left, Karl Zukauskas, a technician from the Roger Reed Fish Hatchery in Palmer; Jessi Manty, Central District wildlife technician with the state Department of Fisheries and Wildlife, and Leanda Fontaine Gagnon, fisheries biologist, hold the final capture of a night at work on Quabbin Reservoir, a 12-pound male lake trout. Photo/Brad Miner

BELCHERTOWN – By day, Quabbin Reservoir draws tens of thousands of visitors each year.

Sightseers, hikers, birders and anglers are among those who embrace its grandeur and resources.

Under cover of darkness, a select few aquatic biologists and wildlife technicians ply the waters off Winsor Dam and Goodnough Dike this time each year for a gillnet survey, adding to decades of lake trout research. A gillnet survey is done to measure the growth of fish and spawning activity.

As of a year ago, a similar team of Massachusetts Division of Fisheries and Wildlife biologists and technicians mirrors those efforts on Wachusett Reservoir.

According to Mark S. Tisa, deputy director of the Division of Fisheries and Wildlife, Quabbin and Wachusett have the southernmost self-sustaining lake trout population in the eastern United States.

The reservoirs are the only water bodies in Massachusetts where lake trout are found, added Todd Richards, MassWildlife assistant director of fisheries.

“It’s a fishing experience equal to what you might find at Moosehead or Sebago Lake in Maine … without having to make the drive,” Mr. Tisa said.

Because it’s been decades since MassWildlife conducted a creel survey at Quabbin, Mr. Richards said, there’s no way to accurately estimate the size of the lake trout population. In a creel survey, fish are weighed and measured after caught by fishermen, and the data is recorded.

He explained that over time, the agency has received anecdotal information from anglers about their catch. Plastic tags affixed to the dorsal fin of lake trout since the early 90s have an identification number and contact information for reporting the weight and length of the fish caught.

“It’s not exact data, and that’s why five years ago we started the tagging program during the fall spawning season, using PIT tags,” Mr. Richards said.

The passive integrated transponder tag implanted beneath the skin, between the pelvic fins, provides unique identification.

Mr. Richards explained that because Quabbin and Wachusett are pristine public water supplies, there is a limited food supply for the opportunistic lake trout that inhabit the coldest depths.

“Lake trout live a very long time, in some instance as long as a hundred years, and they grow extremely slowly,” he said.

Mr. Richards added, “It’s not unlikely that a 20-pound fish caught today could well be one that was originally stocked back in the 1950s.”

Close to 300,000 lake trout of different sizes were stocked during that period, according to DFW records.

Fisheries biologist Leanda Fontaine Gagnon is crew leader of the Quabbin survey team, which surpassed its annual quota of 200 tagged lake trout with recent sorties to the spawning grounds in front of Winsor Dam and Goodnough Dike.

Accustomed to adverse conditions, the four-member crew was unfazed by the heavy mist over the reservoir as they dressed in foul-weather gear and set out from the boat cove earlier this month.

Jim Lagacy, Angler Education Program coordinator, maneuvered the flat-bottomed research boat toward the dam, the lights of the Quabbin Visitors Center providing a visual cue as to the destination.

The only other lights on the water that night came from the two Department of Conservation and Recreation boats on nightly gull patrol.

A battery-powered floodlight illuminated the bow of the boat, as Ms. Fontaine Gagnon and Jessi Manty, Central District wildlife technician, secured the gillnet to rocks at the base of dam, signaling Mr. Lagacy to back the boat off the dam as the 6-foot wide, 150-yard long net played out.

Once two nets were deployed perpendicular to the dam, the crew donned headlamps, checked gear and equipment and had a swallow or two of tea or coffee before the night’s work began in earnest.

The well-practiced routine involved setting the nets, and then waiting a half hour or so before hauling them in, untangling fish as quickly as possible, then tossing them into the livewell.

When all fish were aboard, the crew reset the nets and set up for processing the catch.

In turn, each trout was plucked from the livewell, measured, scanned for a tag, and then implanted with one if none was found.

Karl Zukauskas, hatchery technician at the Roger Reed Hatchery in Palmer, clipped a vestigial fin on the trout’s back, weighed it, and released it back into the reservoir.

Repeated as many times as there were fish in the livewell, each laker was processed in 30 seconds or less.

“Male, 521,” said Mr. Manty, giving the measurement of one trout in millimeters for Mr. Lagacy to record in that night’s log.

“Foxtrot dash zero eight alpha nine,” she said, reading the identification number off the screen of the PIT tag scanner.

“One point two nine,” said Mr. Zukauskas, reading the scale that weighed the trout in kilograms before it was returned to the reservoir.

Over the course of five hours on this particular Thursday night, 62 lake trout were tagged; six recaptures were recorded; and one fish had a clipped fin but no PIT tag.

The skill and expertise of the survey crew is evident in that less than 1 percent of the fish netted don’t survive.

Fish that don’t survive are brought to the lab at field headquarters, where microscopic examination of the growth rings of the otoliths, an ear bone, helps determine the age of the fish.

Ms. Fontaine Gagnon explained that netting off Goodnough Dike one night each season was added to see if fish tagged at one spawning ground would migrate to another.

The sampling of both locations, the biologist said, should determine to what extent, if any, fish are crossing over to the other spawning location.

“Theoretically, we would expect little if any crossover because historically fish return to spawn at the location where they were born,” she said.

While last year’s captures included a 24 pound and a 29 pound lake trout, the biologist said food supply is the greatest challenged for Quabbin lake trout.

“Anecdotally, we’ve heard from anglers the lake trout are feeding on small white perch, or smelt when available, and occasionally isopods on the reservoir bottom,” she said.

Mr. Tisa credited the staff at Quabbin and the interagency collaboration between the DFW and DCR with the success of the sport fishery at the reservoir.

“We have Bill Pula to thank. He’s one of the good guys, a guardian of the resource and wise recreational use of that resource,” he said. William E. Pula is regional director of the Quabbin and Ware River watersheds, a division of DCR.

Mr. Tisa acknowledged the role that sportsmen have played for decades in keeping Quabbin available for compatible recreational use such as boat fishing and shore fishing.