Monster or Valuable Asset to Our River Systems?

Monster or Valuable Asset to Our River Systems?

Many people see these creatures as a nuisance. Many also think that 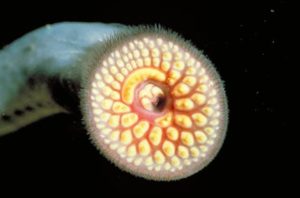 they are invasive. While they look like a prehistoric monster type eel, they are far from the monster many think they are. We in the Northeast do not live in the Great Lakes, in which the sea lamprey is invasive and very distructive, and those sea lampreys in Lake Champlain, well, we are not 100% sure whether they came through the Hudson River and Champlain Canal or whether they are native to the lake as recent studies have indicated.

Sea lampreys are a parasitic fish native to the Atlantic Ocean. They have remained largely unchanged for more than 340 million years and have survived through at least four major extinction events. Sea lampreys are unique from many other fishes in that they do not have jaws or other bony structures, and instead possess a skeleton made of cartilage. While sea lampreys resemble eels, they are not related and are set apart by their unique mouth: a large oral sucking disk filled with sharp, horn-shaped teeth surrounding a razorsharp rasping tongue. 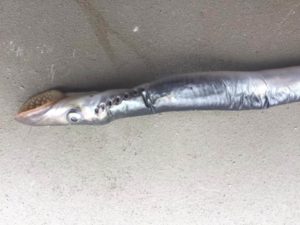 Sea lamprey pulled off a striped bass by Michael Linnen on 4/27/2017, caught in the Housatonic River.

The sea lamprey is an anadromous (sea-run) fish native to coastal North Atlantic watersheds. Adult sea lamprey spend 1-1/2 to 2 years in the ocean, where they grow to maturity, after which they return to rivers and streams for spawning. Incubation takes 10 to 13 days and once the eggs hatch, larval sea lamprey stay in the nest for 4 or 5 more days during which time they develop gills, pigmentation and buccal hood. They then drift downstream where they burrow into the muddy bottoms of streams, rivers and lakes. These ammocoetes stay in the substrate for 4 to 8 years filter feeding upon planktonic drift. Eventually, they emerge from their burrows and metamorphose into transformers, the migration life stage which is similar to the final adult form.

The information in this was compiled from a couple of sources: