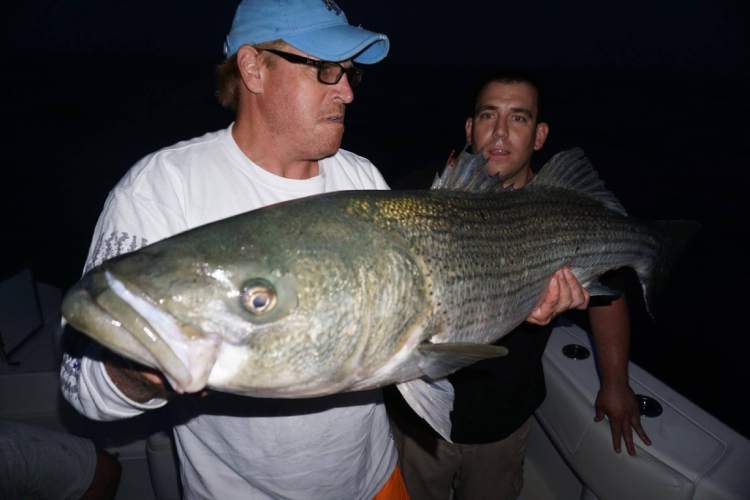 Greg Myerson left on a boat last week with a group of friends, headed for Block Island in an attempt to break his World Record for longest striped bass.

They left in the afternoon and saw porpoises, a whale and a bluefin tuna jump out of the water, Myerson said. They didn’t fish in Block Island until later that evening.

The group wasn’t able to break the 113-centimeter record for striped bass, but they tied it.

“The fish out there have a lot more oxygen — they’re more active and stronger,” Myerson said. “… The fights were epic; the battle was great. We were using all of our gear.”

Myerson, a Wallingford resident, is the owner of World Record Striper Co. in Westbrook. He created the “rattlesinker,” a lure that includes a rattle that mimics the sound of various crustaceans.

His business grew significantly after he appeared on ABC’s “Shark Tank” in May and landed a deal with Mark Cuban. He agreed to accept an $80,000 investment from Cuban for 33 percent of his company.

While he’s busy making sure he can keep up with the demand for his products, Myerson also tries to fish as much as possible. He’s promoting catch-and-release and trying to break records sanctioned by the International Game Fish Association.

He carries a IGFA sanctioned tape measure in case he catches a striped bass. Jack Vitek, the world records coordinator at the IGFA, said breaking the record could be difficult.

“Breaking any world record — regardless of the category — for a highly sought after species such as striped bass is never easy and does not happen very often,” he said. “While this particular record category … is relatively new (started in 2011), the past four years have allowed the records to grow so that beating one, or even tying one, is no easy feat.”

When he caught a striped bass that tied his record, which he set in 2012, Myerson said it made him eager to break it.

“We were like, ‘Oh, man. It was so close!’” Myerson said. “You have to break it by at least a centimeter and it wasn’t.”

When his friend caught a fish that also tied the record, Myerson said he wasn’t disappointed, but excited.

“I loved it; I wanted him to break the record,” he said.

“We got a great resource here. The Sound is cleaner than ever and I’d like to see more people out there,” he said. “… To see a school of porpoises and a whale and to catch a big fish, people pay big money for that. And it’s right in their backyard.”