Courtesy of New Britain Herald on November 23, 2015 by Brian Johnson 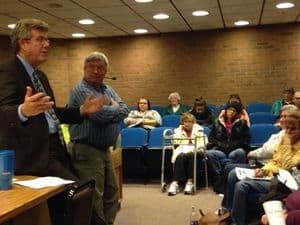 PLAINVILLE — The preservation of Paderewski Pond became a townwide issue after more than 1,000 fish suddenly died in late September.

Plainville Town Manager Robert E. Lee was joined by Don Mysling, senior fisheries biologist with the Department of Energy and Environmental Protection, for a recent public hearing. Mysling conducted a study of the pond shortly after the fish-kill and attributed the die-off to low oxygen resulting from an extended period of hot, dry weather.

The meeting saw a large turnout of concerned residents, with nearly every seat filled in the Town Council Chambers at the municipal center.

“As the town manager for the past 11 1/2 years, very rarely has my phone rung about problems at Paderewski Park,” Lee said. “I think, for many people, this fish kill was a wakeup call that showed us we need to have a conversation, and something needs to be done. It has gone too far, and perhaps something should have happened a long time ago.”

Conservation Commission Secretary Lisa Lozier suggested banning recreational fishing at Paderewski Pond and allowing the area to return to its natural state. This, she said, would also provide a habitat for butterflies and rabbits.

“I was told 28 years ago that we didn’t have the manpower to clean up Paderewski,” Lozier said. “I have taken it upon myself ever since. I have no problem with sportsmen, because they leave nothing behind, but I am constantly cleaning up fishing lines, lures and garbage left behind by recreational fishers. I have rescued 350 animals, from frogs to swans, which were caught up in fishing line. I have seen fishermen urinating in the pond, leaving behind used diapers and condoms, and even throwing used oil cans into the water.”

But resident Jeff Bruco said he strongly opposed a ban on fishing.

“I spent a lot of time fishing in this pond as a child,” he said. “You can’t stop fishing and allow everything to just get overgrown. We do need to do a better job with cleaning it up though. What if we put up signs asking people not to leave their garbage lying around?”

“Our society has devolved to the point where people leave their trash and fishing line around and they just don’t care,” said Lee. “We made Norton Park — which in many ways is our flagship park — look nice, and went out of our way to put out ample trash cans. I still see piles of garbage right next to trash cans that are barely filled. Twenty-five years ago I would have said to have a conversation with the person about it. Now, they are liable to pull a gun on you and shoot you for suggesting that they did something wrong.”

Other residents suggested dredging the pond in order to make it deeper so that it would not heat up as quickly. One man suggested creating a wetland barrier that would catch runoff from the roads and prevent contaminants from getting into the pond. Some suggested restricting access to areas surrounding the pond that were eroded, but others said this could lead to people cutting through private yards. Joanne Edmun suggested diverting a clean-water line to pump fresh water into the pond. Tammy Duprey, a Paderewski neighbor, recommended introducing bio-enzymatic bacteria to eat contaminants in the pond and clean it up.

Mysling said he was “blown away” by the response from town residents.

“You all have great ideas,” said Mysling. “I have provided your town manager with a list of commercial consultant firms that specialize in lake and pond management. The next step should be to come up with a conceptual list of concerns and ideas.”