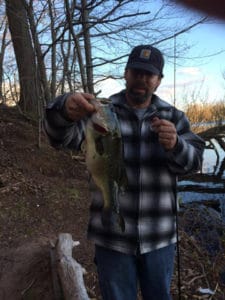 An angler with a bass caught in 2-1/2ft of water immediately following the turnover last year in 47deg water.

Most of us Bass anglers have learned that it’s much easier to pattern our bass when they settle into an area for an extended period. Still, there are two seasons of the year when the bass really go on the move: spring and fall.