Home » Guest Blog » Time For a Change by Adam Tarnacki

Time For a Change by Adam Tarnacki

With Carp fishing taking over my fall fishing season, I thought it was time for a change. My friend Bailey asked if I would be able to take over for a spot on a fishing charter that his uncle had booked for Blackfish. I jumped at the opportunity. I had only caught a few Blackfish in the past and I thought that maybe I could give these fish one more try, and little did I know it was going to be one of the most memorable trips I had ever done.
It was a Friday, and for me, the end of the week like most other college students. The morning started off by my alarm clock buzzing at 4am and I had to pick up my friend Bailey. Right after that I picked the kid up and we drove down to Old Saybrook, and of course we had to do a Dunkin Donuts stop. We arrived at the Sea Sprite that is run by Captain Pete. The boat is located right in the mouth of the Connecticut River. It was about 6:15 till the captain and the rest of the people showed up, which included Baileys’ uncle, Joe the mate, and a few of Baileys uncles friends. We left the dock immediately and decided to troll a couple of spots for Striped Bass and Bluefish on the way to the Black fishing spot.
Me and Bailey got to troll first as only a couple people were able to do so at a time. The first spot we trolled was the mouth of the river and after a few runs over a small reef it was clear the fish weren’t there. Captain Pete told us to reel in and we headed to Hatchett’s reef to troll for a bit. Now it was Bailey and his Uncle who were trolling the wire lines and buck tails. As I was drinking a Snapple, I heard Baileys’ uncle scream, “FISH ON” and what a blast that was. The next thing I know, while he was reeling the fish in, Bailey screamed the same verse. A fisherman’s most exiting feeling had happened, the feeling of a double header. Baileys’ uncle got the first fish in, and it was close to a double digit Bluefish while Bailey had a seven pounder. After they got their fair share of fish it was my turn. Once again it was not long for the next fish. After a 5 minute battle I got a Bluefish in the boat that just topped ten pounds. A couple of the other guys took their turns with no luck, and now it was time for some Blackfish, the main goal. Captain Pete took us to one of his marks, a rock pile which he likes to keep under his hat. With about 10-20 minutes the Captain was trying to anchor directly over that mark, and once that anchor landed, it was maybe 2 minutes for the first Blackfish to fly over the rail.
The Black fishing was the best I have ever seen; fish were flying left and right. Some of the fish were shorts, but there were a fair share of keepers at 16 inches. Those fish could not resist the Green Crabs that were on the menu. The boat was stationed about 3 hours on that rock pile and we had a limit of 28 Blackfish, 4 fish per person. Blackfish were not the only ones flying over as we had some Porgy and keeper Black Sea Bass on board. It was the most fun I’ve had in a while, but it was time to go back. On the way back we decided to troll again in the mouth of the river, and I was first to go again with Bailey. Of course, I hooked onto another ten pound Bluefish. After that fish we called it quits for sure, and it was time to head to the dock. 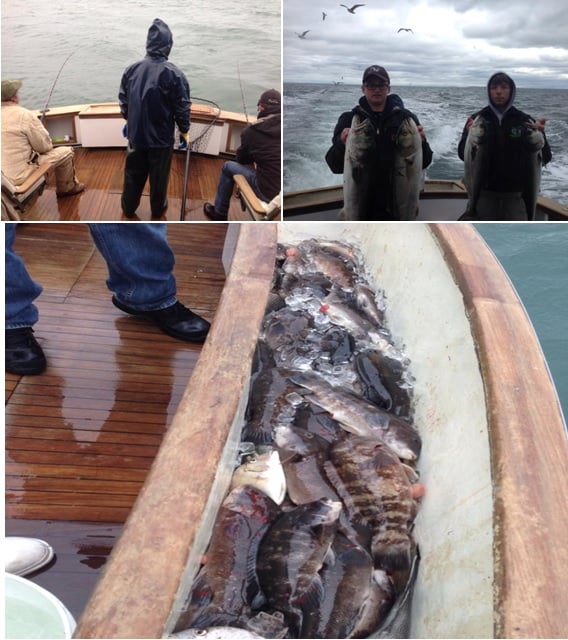