Fishing the Wacky Rig:
The wacky rigged soft stickbait is an interesting technique. Although I may endure some scrutiny for writing about such a “simple” technique, I’m going to do it anyways. Because, everyone should know what this method is all about. There are many common misconceptions, that the wacky rig is “only for beginners”, or “it only catches small fish”. Well… if that’s how you feel about it, then I ask you to put your ego aside, and give it another chance. So let’s get down to it.

Who?:
One of the best parts about this practice, is that anyone can do it, so yes, it is for beginners, but also pros alike. No matter what your skill level, I assure you, that you can catch fish with this rig.

What?:
The most common bait for the wacky rig, is a soft stick bait. A vast majority of soft plastic manufacturers, have some variation of this. My three favorites are the Cobra Bait Dead Bolt, a Gary Yamamoto Senko, and the Yum Dinger. My color choice depends on water clarity. Clear to murky water, I prefer a watermelon or pumpkin color. Stained to muddy warrants something a little darker, such as black or junebug.

When?:
Oh boy, when isn’t a good time to throw a wacky rig? You could make this technique work pretty much all year long. But my favorite times are from prespawn through post spawn. Late summer, when fish start getting ready to move up shallow for the upcoming fall feeding frenzy can also be very productive. I tend to shy away from this technique when fishing deeper water, because 99% of the time, I fish this rig weightless. It would take forever to get the bait down to where this fish are if you’re fishing in 30′ of water. However, you could always use a 1/32 oz wacky jig to speed up the process if you were so inclined. This technique also excels when fish are suspended due to cold fronts, high pressure, etc.

Where?:
I generally apply this method in shallower water. Lily pad edges are my favorite area to fish with this rig, but also the outskirts of laydowns, docks, overhanging bushes and trees, and pretty much any shallow water cover you can find. If you can master the art of skipping, you can get into those hard to reach areas, that are often overlooked by other anglers.

Why?:
I wish I had an answer for you, but I really don’t know. It doesn’t really imitate any type of forage, one could argue that it mimics a worm, but I’ve never seen a real worm like that before. But whatever the reason, there is just something so tantalizing to a bass about that slow sweeping side to side fall that you get, that they just cant resist it.

How?:
Ah yes, the big question, “How do you fish it?” Like I stated earlier, I almost always fish this weightless. I use either a number one or number two wacky hook, and I use a #6 o-ring to slide over the bait, and my hook threads between the bait and the ring. This helps them last a little longer, thus saving you time and money. I prefer to use a Medium action spinning rod, with 10 lb test Yellow Power Pro braid, with a fluorocarbon leader. After you make your cast, DON’T DO ANYTHING! Let the bait sink for a few seconds, and if you don’t see your line twitch or feel a strike, pop the slack. Don’t move the bait, just move the line. Keep repeating this process until your lure has vacated the strike zone, then reel in and try again. When you do see your line jump, be sure to use a hard side sweeping hook set, rather than a vertical hook set like you would use with a jig. The way the hook is shaped, it will stick perfectly into the corner of the fishes mouth. 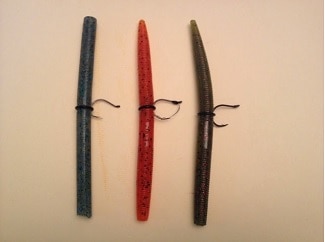 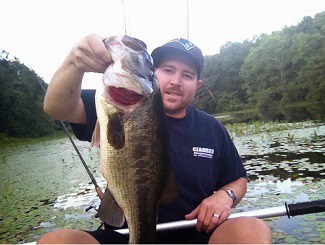 This bass hit a Watermelon/Red Flake senko, and weighed in at 6lb 2oz, thus proving wrong those who say, “It only catches small fish.”

Bottom Line:
This technique should be ineveryone’s arsenal, regardless of your skill level. Don’t let the “misconceptions” fool you. When fishing gets tough, you will be surprised how many fish you can catch by utilizing the wacky rig. Now, go give it a shot, and start catching.