Breaking in a New Rig on the Delaware

Breaking in a New Rig on the Delaware 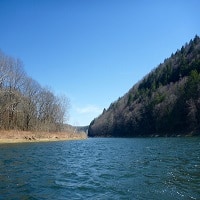 Last week was a long one. Since moving into our house almost three years ago, we knew a deck replacement would need to happen sooner rather than later. The old deck was neglected beyond the point of making repairs worth the time or effort. So, during my wife’s school vacation week, we tore the old deck out and built a new one. It’s nice to have a new and bigger deck, but it felt like a sort of crummy way to spend a week of beautiful weather. Luckily, my friend Harold asked me to join him and guide Steve Taggart on a Saturday afternoon/evening float trip down the mainstem of the Delaware River.
The weather was beautiful, albeit a bit too sunny to make most of the trout willing to come up for a dry fly. Despite the effects of the sun, we were able to headhunt for enough large risers to keep us busy throughout the day. Given the funky wind, I probably should have rigged up my 6 wt. dry fly rod, but I wanted to try out my new 5 wt. combo. I strung up my Beulah Platinum 9′ 5wt. and an Abel TR2 reel. We expected to see Hendricksons on the water, so I tied on my favorite fly for that hatch, a variation on Bob Quigley’s deadly Quigley Cripple. 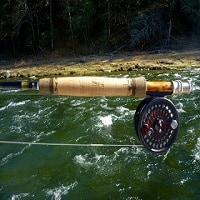 It wasn’t too long before we found a few risers. This was my first time fishing the Delaware, so it took me a little while to wrap my brain around fish that weren’t necessarily staying in one place to intercept insects. Trying to anticipate where the target would rise next was tricky. I eventually pinned one down and hooked up to a brown about 16-18 inches. I was surprised at how strong these browns are! They can be difficult to lift. I thought the brown was as good as landed, but it popped off at the last second.

As the hatch progressed, we moved downstream and continued to hunt for large fish. We struck out in an area with rising fish on the far side of a few complex currents. Throughout the day, we found good targets and managed to prick a few with one of Steve’s comparadun patterns.
For me, the highlight of the day was when Steve spotted a large trout at the bottom end of a pool. From a distance, it was difficult to tell if it was a trout or a beaver. He was sticking his head out of the water, gulping bugs off the surface. Each time his head went back under, his big back would show, followed by his tail. He was cruising laterally in a fairly broad area. He wasn’t traveling in any discenrable pattern, so I tried my best to guess where he would emerge next.
CONTINUE READING………Breaking in a New Rig on the Delaware
Bookmark the permalink.