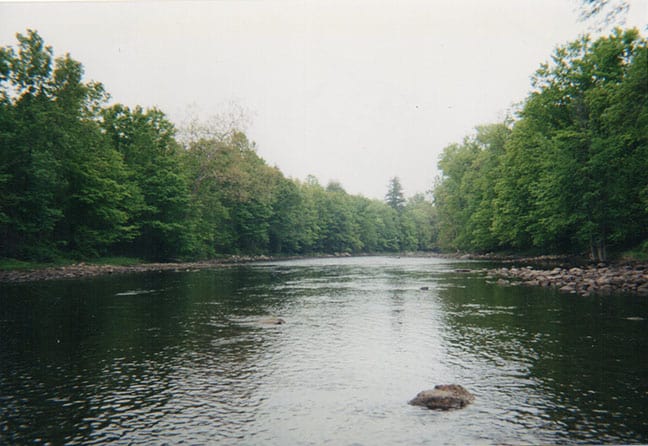 Looking down the Housatonic where the bullets were flying on that day!

Since I am 68 years old and have been fishing  since I was 5 years old there have been many wonderful
and exciting memories to savor. Unfortunately or perhaps inevitably there have been other instances
where I wish I had stayed home ~ Steve Garbowit

When my wife and I were first married, being short of money, a vacation consisted of visiting her
parents in the Springfield Mass area. Walking the property one day I realized that the Agawam and
Conn.  Rivers were close by and very fishy looking. I had no boat, could hardly afford lures, but I could
bottom fish with bait for whatever was in these waters. I was excited to see what was around.
It was fun to catch catfish and bullhead by dunking worms from shore.  My dog and I enjoyed sitting and
waiting on the riverbank below the surrounding farm land.

One day we were enjoying the fishing when I started hearing booms not far away. I looked up at a
nearby brush pile on the top of the riverbank and it jumped after every boom. It dawned on me that
somebody was shooting into the brush pile. After lots of screaming on my part, the firing stopped. It
turned out to be a pair of teenagers firing a large pistol into a target on the other side of the brush pile. I
got out the area fast, lucky to have not been hit. I didn’t venture down to the river for a while, but fishing being my passion , I wasn’t going to let a little incident like that deter me from fishing in the area.

A month later I was fishing another nearby location and I started hearing the familiar booms again. This
time I could see the results of bullets going through the trees directly on the other side of the river from
my fishing spot. Turned out to be a couple of low life’s target shooting a pistol in a nearby field with no
thought of a backstop. I had to ‘duck walk’ my way out of the area to make sure I wasn’t going to get hit
by an errant shot.  It can be rough being a fisherman in Springfield!

Years later I lived in the New Haven area and started putting my waders on and fishing the harbor.  One
time I was having fun, getting schoolies on plugs and enjoying the weather. I noticed some small
explosions in the water nearby and at the same time the familiar pop of a gun in the background. I
flashed back to my previous experience and I was right! Some idiot had put a target up on the top of the
bank of the Sound and was shooting a light rifle (think it was a 22 caliber) at the target. Idiot thought the
water could be a backstop I guess. Well I was standing in the backstop! I was really scared this time but
being New Haven I was hesitant to say anything. I ran to shore in time to see the fools walking out with
the rifle trying to look inconspicuous. Really thought about confronting them, but decided to let it pass.

Several years ago, I decided to visit the eastern  CT.  area for fishing the Housatonic, casting lures for
smallmouth. Nice up there in the warm weather,  pleasant to stand in the water.  I was walking the bank
when I noticed somebody on the same side as me standing on the bank, they didn’t seem to be fishing,
looked to be dressed more in business casual dress. Forgot about it and continued my fishing. Well here
I go again, the bullets are flying over my head. This time they were close and I had no place to hide. I
started screaming for them to stop. Didn’t seem to work as the bullets just kept coming. Finally I
threatened them with calling the cops, that always  scared me, their answer was “go ahead”.  Decided to
make a run for it and waded the river across to the other side as the bullets cut through the bushes near
me.  Actually thought this could be my last day on earth, very scary. As I put trees between me and the
shooters I started to slightly relax. I ran back to the car and drove to a nearby convenience store. I told
the clerk about the incident and he told me there was as resident state trooper around  and those kind
of shooting incidents happen all to often in the area. The state trooper came right away, and gave me a few platitudes but basically said doubt he could catch them but would look anyway. Well still waiting for him to catch them.
Bottom line, never been shot at while in my boat but have lots of stories about that also.