Brush with the Greatness Generation?

Brush with the Greatness Generation? 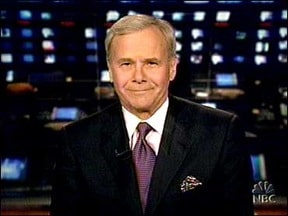 On one of my fishing trips to Northern Ct the fish weren’t cooperating but weather was nice. So I decided to try a different place I had never been before. As I approached the river I began seeing young guys with oversize cameras on their shoulder that were emblazoned with NBC NEWS. I thought this could be a interesting experience. Then I began hearing a familiar voice lecturing on how to fish. Low and behold it was Tom Brokaw standing right in front of me!

At that time Tom Brokaw was on the evening news and I actually watched him every night. It was very surrealistic to have him standing in front of me in such a foreign environment. I was a little stunned but got over it quickly and engaged him in conversation that quickly became awkward. After a little banter about fishing the area I had established this was one character with an imperial air about him. I couldn’t help but look at him closely and notice the numerous hair plugs on his oversize head. The complete experience was very out of context, just doing a little fishing and run into a real ‘celebrity’!

His booming voice was something that must be heard in person to appreciate and the first thing that came to mind was my daughters singing lessons where she learned to project her voice. For some mischievous reason I came out with this question for him, ‘Is that your real voice?’. What I meant was had he professionally trained his voice for the range he achieved but that’s not how he took it. Lord Tom of NBC News went on a long rant on how he was all natural , blah blah blah and how dare I question his abilities. With that barrage I figured I had better leave and next time I see anybody famous fishing I will run the other way!