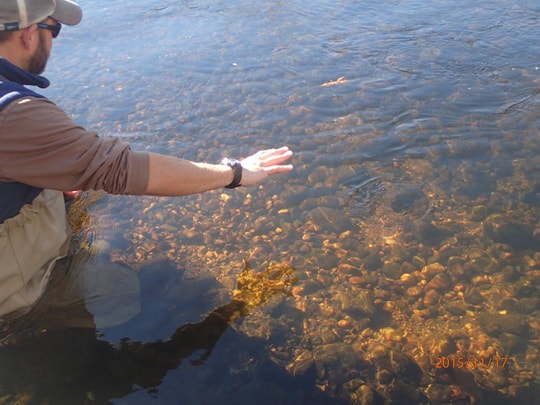 An incredible discovery! This past November, Inland Fisheries biologists discovered three redds (name for a ‘nest’ in the streambed where trout or salmon lay their eggs) made by wild returning Atlantic salmon. This marks the first documented wild spawning of Atlantic salmon in Connecticut since around the time of the Revolutionary War. Connecticut had participated in a multi-State/federal restoration program from 1967 to 2013, when the program was terminated. During this time the returning adult salmon were captured and retained in order to produce millions of fry (juvenile fish) that were stocked into streams within the Connecticut River watershed. Connecticut has since shifted to a “legacy” program, in which relatively few fry are stocked in selected portions of the Salmon River and Farmington River. The goal is to keep this important native species part of our natural resource.

With the end of the restoration program in 2013, adult fish were no longer being retained but instead, tagged and released to continue their upstream migration. In 2015, three adult salmon were captured and tagged while two others were seen on video but eluded capture. All five fish continued their upstream migration, which culminated in some of them spawning successfully. We are very excited announce confirmation of this milestone fisheries event. The termination of the restoration program is regrettable, but the fact that wild Atlantic salmon have once again spawned in our state gives us reason to celebrate and it underscores the value of our ongoing legacy program.